Voting, then and now:

Photo exhibit examines the barriers to voting in 1965 and 2020

It was just months after the passage of the Voting Rights Act of 1965, which outlawed discriminatory practices that had kept Blacks disenfranchised across the South for decades.

It was no easy time for a Northerner to be in Mississippi. In the summer of 1964, three young civil rights workers, including two from New York — Andrew Goodman and Michael Schwerner — had been murdered there by the Ku Klux Klan and local law enforcement. 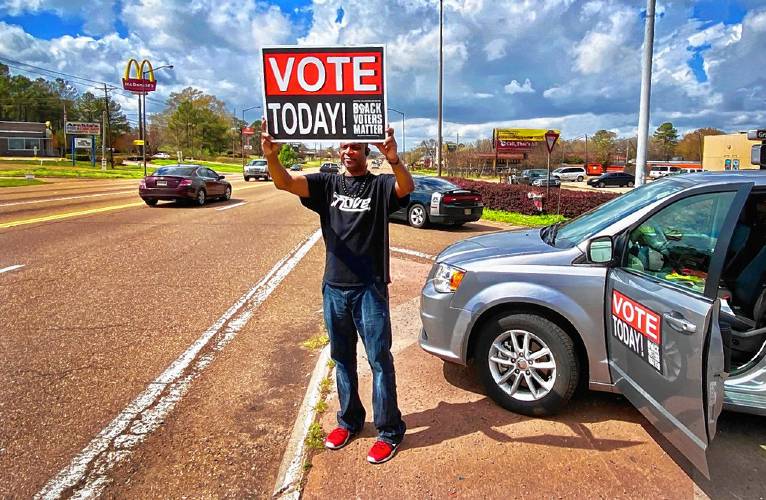 Leonard McCloud, an organizer for Mississippi MOVE, encourages people in the state capital of Jackson to vote on Primary Day in March. Photo courtesy of Jim Lemkin

Their partner, James Chaney, a young African-American from Mississippi, had been killed alongside them — one of countless Blacks across the South who were beaten, shot at, jailed or had their homes bombed or torched as they pushed for voting rights and an end to segregation.

But Lemkin, who today is 73 and lives in Haydenville, came through fine what was called “Mississippi Freedom Christmas” — he and other college students were in the state from mid-December 1965 to mid-January 1966 — and he documented much of his experience with black and white photographs that he since has used to make public presentations about voting rights.

Now he’s added a new wrinkle: He returned to southern Mississippi this past March to talk to African Americans about the barriers to voting today, again documenting the experience with his camera.

Using a mix of “then and now” photographs and text based on interviews with people be met, Lemkin will present his exhibit “Does My Vote Count?” at Northampton’s A.P.E. Gallery beginning Friday, Sept. 4. That’s the day A.P.E. will open its doors to visitors for the first time since the pandemic arrived in March, though various safety protocols will be in place, including limiting visitation to eight people at a time.

In a recent phone interview, Lemkin said he has been concerned about new methods of voter suppression that have cropped up in numerous states since 2013, after the Supreme Court, in a 5-4 decision, threw out a key provision of the Voting Rights Act. States were given renewed permission to set their own regulations, and a host of new provisions — voter I.D. laws, reduced early voting opportunities, closed polling stations, disenfranchisement of ex-felons — have now been put in place, overwhelmingly in states with Republican governors and legislative majorities.

Lemkin says these voter suppression efforts have been aimed disproportionately at people of color, the poor, the disadvantaged and students. But if much of that is coming from Republican states at the moment, Lemkin notes that Democrats and Republicans have been “equal opportunity oppressors” over the years (the Deep South states were all controlled by Democrats in the days of segregation). 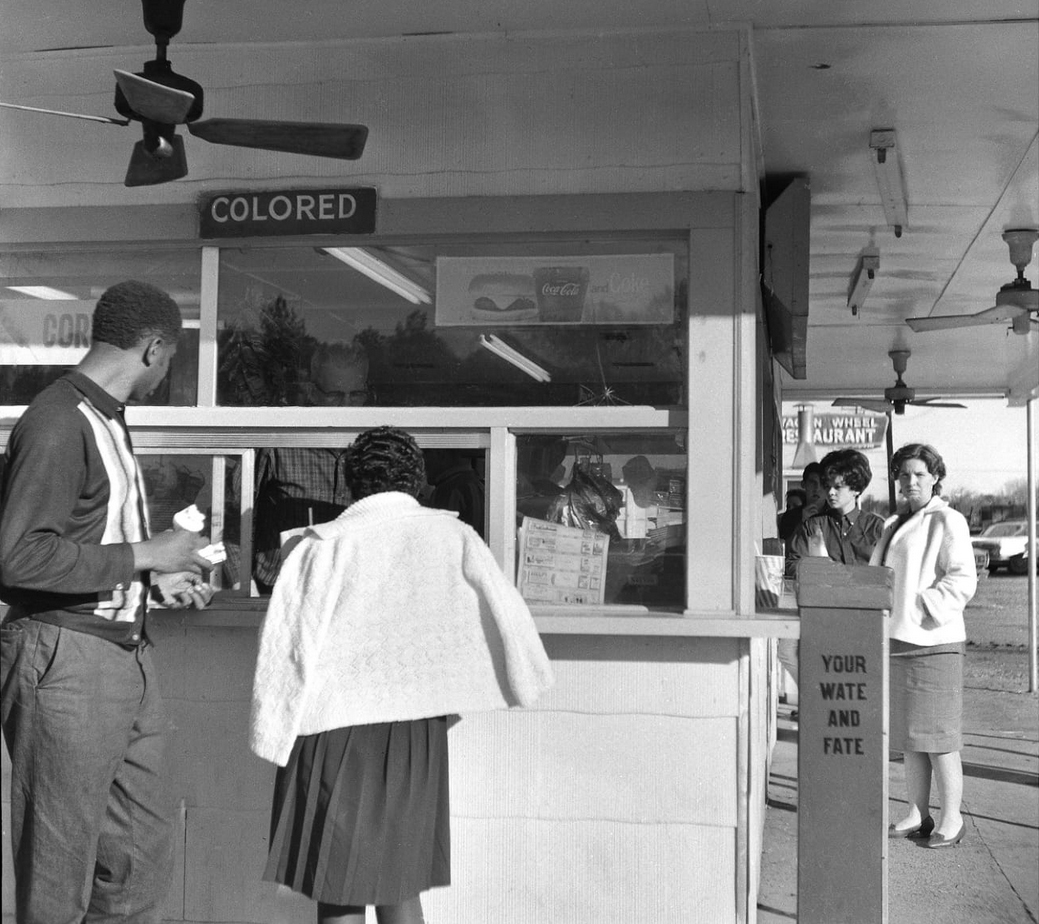 Black people ordered from a different window than white people at a burger stand in Mississippi.

“This is more of an issue of morality,” he said. “Voter suppression, wherever it comes from, strikes right at the heart of our democracy. We need to cultivate compassion for all people and get away from this pendulum effect based on which party has the upper hand ... The question really is, where do we live in our hearts?”

Lemkin’s photographs from 1965 offer a vivid contrast to his more recent ones, and not just because of the difference between black-and-white and color images. Lemkin and his fellow volunteers visited some African Americans living in serious rural poverty. In one shot, 11 adults and children are shown on a rickety porch that’s propped up on its corners by large rocks; the home’s outside consists of unpainted wood boards.

And more than a year after passage of the Civil Rights Act of 1964, which struck down segregation in stores, bus depots and other facilities, another photo shows a burger stand with two serving windows: one for one whites, and another for “colored.”

Lemkin’s newer photos, which he took with an iPhone, are accompanied by quotes that come from video interviews he did with African Americans he met during his March visit.

“I had a lot of help from groups like Mississippi NAACP, the Southern Poverty Law Center and others that made introductions for me,” he said. “It took weeks of phone calls to set it all up, but I met a great range of people, including older voters who’d first been able to vote” after passage of the Voting Rights Act.

Brother Hollis Watkins, for instance, a veteran civil rights activist in Jackson, the Mississippi capital, recalls spending 34 days in jail after attempting to buy a cup of coffee at a “whites only” lunch counter. He says election officials would deny Blacks voting rights through any number of means, such as “ridiculous” tests that required would-be voters to identify how many grains of sand were in a jar.

Voting barriers still exist. Anthony Witherspoon, the mayor of the town of Magnolia, had a stint in jail as a younger man and learned about rules denying the vote to felons and ex-felons; he later successfully challenged the law and regained his right to vote. But he tells Lemkin that many other Mississippi Blacks with prison records — also called “returning citizens”— still don’t have that right.

“If a person has paid their debt to society … they should have a voice in what happens in their lives,” says Witherspoon. “I’m for full restoration of rights after your time is served … or else just say that you sentenced them for life!”

And Leonard McCloud, an organizer for Mississippi MOVE, worries about African Americans he’s spoken to who feel voting never changes anything in their lives, as well as young people who don’t seem to care about the leaders of the civil rights era or voting. “They’re caught up in the fast life,” he says. “I call it the ‘hip hop generation.’”

“I don’t like to mix religion and politics, but God has to be in the picture somewhere!” McCloud adds. “If we don’t do things with our hearts, with compassion, we are not gonna get things done.”

Lemkin says there’s no early voting in Mississippi, a particular hardship for single parents and young people who may have little flexibility to take time off from work to get to the polls. And whites, he says, who vote overwhelming Republican, hold all statewide elected offices, while Blacks, who vote overwhelming Democratic, earn wins predominantly at local and county levels and only in districts with a majority of African-American voters.

Lemkin says he hopes his exhibit can be an inspiration for people to get involved in efforts to fight voter suppression; information on organizations that do that work will be available at A.P.E.

As he writes in an artist’s statement, “If we care about preserving our democracy, isn’t it time we reflect and act on this simple rule: Treat each other as we would like to be treated? Has this perennial ideal that makes for a vitally functioning society fallen woefully by the wayside? Doesn’t true justice begin here?”

Steve Pfarrer can be reached at spfarrer@gazettenet.com.